Time is dwindling and with less than 24 hours until my 16 hour flight home, I find myself soaking in the last of the Australian summer, the pristine shark infested beaches, the Tim Tams, and the “G’day mates”.  I0 years ago I studied abroad at University of New South Wales in Sydney.  From the moment I left, I craved the supreme vibe of relaxation Australia left in my being.  I also craved Tim Tams.  In fact, for the past 10 years now, I’ve been shipping them all the way across the Pacific.   If you’ve never heard of them, stop reading now, run to the closest World Market, and buy a package (it’s the only place I’ve found that finally sells them).  Tim Tams, one of the greatest things to ever come out of Oz.  They look like a rectangular biscuit (a.k.a cookie).  So now that you’ve returned from world market, continue reading.  Nibble off both ends, just a tiny tiny nibble, just enough that you get through the chocolate coating to the biscuit. Now grab yourself a warm cup of coffee or hot chocolate if you’re really feeling sugary, and use the Tim Tam like a straw to drink your warm beverage through it.   QUICKLY toss the Tim Tam into your mouth as the whole thing begins to melt from the inside out between your fingers!!!  It’s an art really.  Be careful, I consumed an entire package in the first hour on arrival to this glorious biscuit heaven. 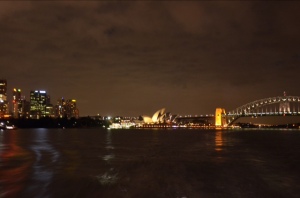 Sydney was just as I had remembered it.  Busy metropolitan city, warm sun in December, packed beaches even at 2pm on a Tuesday, semi-Euro but similar to home in so many ways.  I would venture to say, that besides Canadians, Australians are more similar to Americans than any other country.  Obviously they talk a little funny and wrestle crocodiles by the age of 3, but for the most part, Australia feels very much like home.  Or maybe it’s just because it’s left such an imprint on my heart for so many years.  Either way, Australia is truly as we read about.  A land down under with more venomous deadly creatures than anywhere else on the planet.  Just the other day, my friend Tytus was working in the backyard and was almost bitten by a venomous Brown snake!  Yeah, it’d be nice to think that these deadly creatures are only in the wild outback (or bush as the locals like to call it), but no, they’re in the suburbs of Brisbane hanging out by your patio furniture.  Oh, and you can forget about going swimming in the gorgeous beaches of Cairns, Port Douglas or Darwin… crocodiles, sharks and deadly jelly fish wait patiently for any pre-warned but rebellious tourist to wade in.  They actually have man-made sand beaches and pools right next to the ocean to try to dissuade you from venturing out.  Complete with Christmas Trees in December. 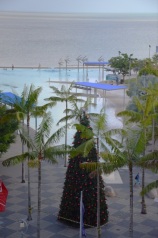 Luckily it seems Australia has a top-o-the-line marketing team.  The images of cuddly kangaroos and koalas is enough to make you overlook the previous life threatening aspects of the place and stay awhile.  We may have goat filled petting zoo’s, but theirs are overrun with wallabies, Grey and Red Kangaroos and the laziest koalas I’ve ever met.  And they’re as soft as they look, although the cuddliness left a lot to be desired.  My little friends below could have cared less that I was there, they just didn’t want to be woken from their naps. After my week in Sydney, and 10 days in Brisbane, it was time to make a weekend trip up to the Great Barrier Reef and Rainforest for a few days of snorkeling
and sun.  (My tan from Bali had begun to fade and I have plans for arriving at Christmas dinner in the snow covered windy city a golden goddess 🙂

Check out the nails… NOT cuddly!

My trip is winding down, and as I look to “what’s next”, I’m still not sure.  Therefore, for now my only plan is enjoying my last few hours in Oz; laying on the pristine beach, eating Tim Tams, and wading carefully into the ocean at Manly Beach keeping one eye on the surfers (I’m still looking for tips) and one eye for fins in the water heading my way.  For some reason the Jaws song keeps playing in my head 🙂

“When we come up out of the underworld after one of our undertakings there, we may appear unchanged outwardly, but inwardly we have reclaimed a vast and womanly wildness. On the surface we are still friendly, but beneath the skin, we are most definitely no longer 𝘁𝗮𝗺𝗲.” . - Clarissa Pinkola Estes . . I couldn’t be more excited to study with this woman this summer. When her workshop “Singing over the Bones” opened up, it took less than an hour to fill. The waitlist is hundreds long. I am ready again for going into the underworld with her as my guide and channeling her teachings in my future @walkabout_yoga_retreats and yoga trainings. Who knows what sort of creature will emerge afterwards, but I am certain she will not be 𝘁𝗮𝗺𝗲. . Join me this fall for 2 incredible Intensive Retreats where I will be sharing EVERYTHING I’ve absorbed from this woman with you. . 📍Bayfield, WI Training Retreat co-hosted w/ Robert Sturman ~ Artist/Photografía @ Wild Rice Retreat 📍Grand Cayman Training Retreat co-hosted w/ Patti Doyle . Link in profile 🕯 . #walkaboutyoga #clarisspinkolaestes #womenwhorunwiththewolves #singingoverthebones #kiragrace @kiragraceyoga 🌑
I CREATED SOMETHING... 🙊🦓🐘🦏🛫🌍 Wanna come?? YOGA & SAFARI Retreat in Tanzania February 2021! . 🦁 Early Bird Special still running! 🦁 . . 🦓 This 8 or 13-day safari and cultural experience is hosted by Walkabout Yoga & Zagas Explorer. . 🦏 We will lead you through Tanzania’s renowned northern circuit of national parks to see the BIG 5 with daily yoga and meditation practices to soak in the landscape and experience! . 🦒 For those participating in the full 13-day retreat, participants will additionally spend another 5 days on the beach on the tropical island of Zanzibar, located off the coast of Tanzania in the turquoise waters of the Indian Ocean! . 🐘 It's time to take a yoga retreat on the wild side😬 . •••••••••••••••••••••• . • THE EXPERIENCE 🦁 8 day luxury safari that includes visits to Tarangire National Park, Lake Manyara National Park, Serengeti National Park, and Ngorongoro Conservation Area. Also includes a day trip cultural experience with the Maasai tribe. (If doing the safari portion of the retreat only, trip does not include the Zanzibar portion.) 13 Day Retreat inludes the 8 day luxury safari PLUS 5 day luxury retreat on the beach in Zanzibar. . • DAILY YOGA & MEDITATION 🧘🏻‍♂️ Daily yoga sessions, 1-2x per day depending on activities . • GUIDES AND TRANSPORTATION 🛺 Professional English-speaking safari guides; all transportation during the trip including airport transfers. . • ACCOMMODATIONS & MEALS 🍌 Shared / double occupancy luxury tent accommodations during the safari; shared / double occupancy luxury bungalow accommodations in Zanzibar. Single accommodation can be arranged for extra cost (single supplement) upon request if availability exists. Three meals per day, most alcoholic and non-alcoholic beverages (except in Zanzibar), and water during days on safari. . •DOMESTIC FLIGHTS 🛫 Flights from JRO Airport near Arusha to ZNZ Airport in Zanzibar, if participating in the full retreat only. ••••••••••••••••••••••••••••• . Visit link in profile 🦏🐘🦒🦓🌍
ｍｅｔａｎｏｉａ [meh-ta-noy-ah] • Greek (n.) the journey of changing one’s mind, heart, self, or way of life; a spiritual conversion. @arspoetica.us .. Been doing a lot of this recently. It reminds me of another quote I’ve heard recently. “You say I’ve changed, but I’ve come too far to be the same person I was before.” - unknown . Why do people say that like it’s a bad thing? . . 👼🏼🏹 FYI, my girls over at @kiragraceyoga are doing a $20 free “CUPIDCASH” today on $100 purchases and tomorrow starts their HUGE Winter sale. And yup, they’re all I wear. 😬❄️ . #walkaboutyoga #change #butterfly #kiragrace #metanoia #spiritualawakening #transform #inversions #handstand
|| ᏞᎾNᎬ ᏔᎾᏞᏙᎬᏚ || - our poem I tried to sing but could only howl, I wanted to purr but couldn’t stop the growl They said “sit still” But I tore off down the trail, They said “cross your legs” dear But instead wagged my tail. They tried ribbons, and bows, and a matching skirt, But I stripped down naked my paws gripped the dirt. They said “she’s a wild one”, an untamable beast, Finally a truth, and a smirk took my cheeks. They called me ungrounded, my world wasn’t reality, They prayed for my health and my mental conformity. “Someday you’ll see you can’t live in your dream”, Then they drudge through their settling and daily routine. So I stayed in the woods, slept alone ‘neath the stars, And I listened to my heartbeat, welcome the early hours. A peace has settled, my inner rebel still slumbered, There was no need to prove, Their judgement unwarranted. So I sauntered deeper into the woods, To find my true tribe of other lone wolves. //L 🐺 . . 💻 See you Monday on the Walkabout Yoga FB page 💻 . . . 📷 @jennifer.manville . #walkaboutyoga #liveq&a #walkaboutpoems #jennifermanvillephotography #yogaretreats #yogaretreat #yogateachertraining
MIDWEST YOGIS! 🧨 New CE Training & Retreat co-hosted with my uber talented #soulfriend @robertsturman COMING September 2020. I’m so excited to be reunited with this #fotografia magician again ✨ (maybe he’ll even bring my love Chai the rescue pup 🐶) #rescuedog . 📍Bayfield, WI @wildriceretreat . 📆 September 20-24th, 2020 . 🌪’CHAOS REMASTERED’ Intensive Advanced Training & Retreat (CE credits) . Visit link in profile - SPECIALS currently going on @wildriceretreat . . . . #yogaretreat #yogatraining #wildriceretreat #robertsturman #kiragrace #wisconsinyoga #yogawisconsin #bayfieldwisconsin #yoga #chaosremastered #notlost
✍🏼 NEW BLOG out and about... 'αmσr fαtí' - lσvє σf fαtє... from my stubborn heart to yours 🖤💫 . (link in profile) . . 🌳Amor Fati’ Chaos Retreat & CE Training @wildriceretreat (Sept 20-24, 2020) . . . . . 📷 @jennifer.manville . #walkaboutyoga #walkaboutblog #amorfati #wildriceretreat #yogaretreat